Purpose of the areola

When my first child was born it was still common thought that you had to clean and cleanse and disinfect the nipple area so that the child doesn't get sick. But the nipple and areola (dark circular area around the nipple) have a very important function and doesn't need extra help to stay clean. If you over clean you can irritate the nipple so much that soreness and cracking can occur, to the extent of bleeding. During pregnancy, if the mother decides that she will breastfeed, it is a good idea to stop using soap around the areola and nipple area as to avoid drying out. You can also take a sun bath so as to stimulate the skin of the areola.

The aroela has a very important purpose. It helps to support the nipple and also contains Montgomery's glands which help to keep the nipple moisturized during breastfeeding. Within the areola, there are sebaceous glands, sweat glands and modified mammary glands (glands of Montgomery). These glands produce small elevations on the areola surface. The sebaceous glands enlarge during pregnancy and secretes oily material, which acts as a lubricant for the areola and nipple. The breasts are specialized organs, their primary function is to produce milk for nutrition of the infant and baby.

The special glands in the breast are called tuboalveolar glands, which are modified sweat glands. Each of these glands end in a lactiferous duct (2–4 mm in diameter) and opens up through a small hole onto the nipple. Deep to the areola, each duct has a dilated part called the lactiferous sinus, in which milk can accumulate and remain in the nursing mother. Cells which are important in contraction movements, called myoepithelial cells, are present in the gland and help in secreting fluids.

In most cases, a breast is usually slightly larger or smaller, higher or lower or of different shape to the other side. When fully developed, the female adult breast is composed of 15–20 lobes of branching glands. These lobes are separated by bands of connective tissue, which radiate out from the nipple. There is lots of fat tissue within the breast. The amount of fat determines the size of the breast. The fatty tissue gives the breast its soft consistency. This is why the size of a breast does not automatically suggest that a woman may or may not experience problems with producing enough milk. The stimulation from the babies suckling is what regulates the milk production.

This is why women who had a breast reduction wouldn't know before hand whether they would successfully be able to breast feed. You wouldn't know whether care and attention was taken to leave the ducts and glands carefully intact. Here is were patience and trial really takes the role.

The darker pigmentation of the areola also serves it's purpose. The colors range from slightly pink to darker. The pigmentation depends on your ethnic background. The darker coloring of the areola is the beckoning for the baby to know where he has to go. Right after the baby is born put baby on mommies tummy and don't cut the umbilical cord. Leave baby and you will see that baby will slowly try to make his way up mommies tummy and try to latch on all by himself. It may take a while but babies are programmed for survival. The areola lets baby know that the nipple is there and this is where he has to latch on to get milk. But the dark pigmentation also serves another purpose, the darker the skin color the less likely it is for soreness and cracking to develop with all the extra stress the nipple will experience. This is why the areola is darker in color to the rest of the breast.

It's a shame that in our modern times the breast is viewed solely as a sexual object/organ and not to the full potential of it's innate purpose: to breastfeed our infants and babies.
Posted by Angie Angela-Geerman at 1:40 PM

Angie Angela-Geerman
Aruba
Young wife and mother of three, with a passion for pregnancy, childbirth, child education, breastfeeding and more. On my way to become the next certified Doula and Breastfeeding Counselor for Aruba

Certifying for Birth Doula and Breastfeeding Counselor with ChildBirth International 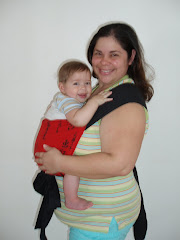 An Asian inpired Mei Tai I sewed just for hubby 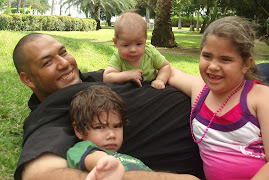